Tripawds Supporter sites have no ads!
Skip to content

Just wanted to put up a couple of quick video clips to show Mika’s progress. Not sure if we would have gone this route without the confidence you gave us, so I just wanted to share…

It was just two weeks ago, Mika became a Tripawd – no regrets! 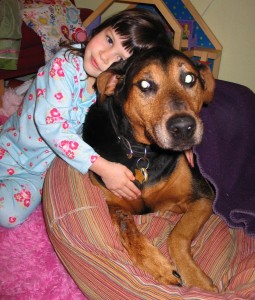 The night before Mika’s amputation, my preschooler was expressing some concern that Mika would be sad about losing her leg. Accordingly, she wondered aloud, “Maybe Dr. K can also tell Mika some jokes to make her feel better like this, ‘Blah, blah, blah cross the road?’ Then Mika will say, ‘Awroo~ Awroo~’.” LOL

Although my toddler twins don’t quite understand what happened, my four year old is very happy to tell anyone and everyone that she has a three-legged dog now. LOL At the grocery last night, I let her pick a toy for Mika and when another shopper asked her, “Is that for your doggie?”, Naomi piped up, “Yes, she had an owie leg so the vet took it off. Mika lost her leg, but found her happiness…”

Just last night, she also asked my husband when the vet was going to put Mika’s leg back on. Uhhhh…

I have to admit, we are very relieved that even the kids understand that Mika’s amputation has been a PAWsative experience!


To remove ads from your site and others, upgrade to a Tripawds Supporter blog!

First you take my off leg and then you post a video clip of me peeing on the internet? Mom, you suck!

Well, I thought today’s homecoming was a wonderful success. What do you think? (Just click on my links to see a few quick video clips)

Hey, kid! Don’t eat my treat!
(Notice the tight grip I have on my toddler’s shirt so she doesn’t accidentally bump Mika. Mika was too zoinked to even care that Elise tried to eat her dog treat. LOL)

Here’s hubby’s write up describing the past two days…

The adventures of Mika the Wonder Dog, who right now is still wondering “What the hell happened to my leg??”

We brought Mika in to the vet on Thursday morning for the amputation. They started the procedure about two hours later (neither of us were on-site for this) and it took about three hours total. The vet said that everything went great. Little bleeding, her muscle had atrophied a bit (from lack of use due to being a bum leg we presume), no open wounds, and that it took longer than she expected because “well, I knew she was a 100 pound dog, but that leg was BIG! It was really tough to get it off!”

We expected to bring Mika home on Thursday night, but she was so doped up that she could not have stood up even if she had four legs. So we talked it over with the vet and agreed that the best thing was to leave her in the crate, at the vet’s office overnight. This allowed us to leave her for a few more hours without forcing her to move and for the staff to check her out first thing. She was so stoned from the pain killers that she probably wasn’t lonely and she would have slept the whole night through.

When the staff saw Mika this morning, she was standing up in her crate. Apparently she squeaked a little bit when no one was around – she really liked the company, and the staff really like our sweet dog too. Tonight we picked her up about 5pm. Mari had made a special three legged dog carrying sling/strap out of an old towel that really helped us to hold her hind quarters up as she tried to negotiate the slippery linoleum floor with one front leg. Although whe was still drugged up quite a bit, when we left the office and helped her hobble on three legs toward the car, she was HAPPY – genuinely smiling and even wagging her tail it was probably because she was stoned, but still…. we picked her up into the car and drove home. Then I picked her up and lifted her down from the car onto our driveway. She took a couple of semi-supported steps and laid down for a break. We then got her up a couple of minutes later – supporti ng about ten pounds of her weight in the back (yes – it is counter intuitive that we would support her back, when the front leg was removed..) and she managed to walk-hop up the lawn, hop up the front door step and then hop again into the house. We laid down some rubber floor mats on the slippery wooden floor, so we guided her down the hall to her new bed (an old crib mattress that we’ve raised a few inches) where she fell asleep.

At 8:30pm, we took her outside (walk-hop with us holding about ten pounds again) where she hung out for a while, ate some ham treats and swallowed her medications. Going inside again was surprisingly less difficult (note that I did not say “easy”) than I expected and we got her back to her bed pretty quickly where she drank some water and fell back to sleep.

Without a front right leg (and her left hidden under a pillow), she looks a lot like a seal laying there, but she’ll be back on three feet in no time!

Unbeknownst to me, Hubby has been doing more research and came to the conclusion of “we need more info”. Then coincidentally, our vet called to let us know that she had just returned (yesterday) from a round-table where there was a noted vet oncologist present. The oncologist provided her some information that makes our vet to want to do a biopsy to see exactly what type of cancer Mika has. The type of cancer (agressive or non-agressive) will help us better determine the best way to proceed. Dave (aka Hubby/Daddy) and I, plus our vet believe that her leg has been hurting for so long, that it’s probably not one of the aggressive cancers – which would be great news. The last thing we want to do is to have her go through the surgery when her prognosis would be dismal. (And I know so many of you have had a dismal prognosis and yet, had your pups bouce back splendidly!) She’s a large dog, with a guestimated lifespan of 12 years, maaaaybe 14 at very very best – probably not with cancer in her body, 4th leg or no 4th leg, but I’m pretending) and she’s 10~11 years old, so we just don’t want to put her through too much to give ourselves a couple of extra months. (Damn, where’s that crystal ball when I need it!)

Soooo, long story short, we ARE going to see an oncologist afterall and try to get more info and do an very detailed (more expensive) biopsy next Tuesday before we move ahead. Luckily, the radiologist said that her lungs look great, so at least it hasn’t spread, but if it’s a really agressive we have to think about the next steps.

Shoot, and I was so looking forward to moving forward…

If anyone had told me a decade ago that someday, I would give birth to twin girls AND been the owner of a three-legged dog, I would have told them they were full of you-know-what! I suppose strolling through the neighborhood with three girls under the age of three (I have a preschooler, too) and a 100 pound Doberman mix wasn’t enough of an attention getter!

In all honesty, I think hubs and I are still in a bit of shock since learning last Saturday that our darling first child is joining the tripawd club. We were scared, we cried, we felt guilty…and then, it all became so clear that this will be the absolutely right thing to do for Mika. She’s had a granuloma for years on her right cankle that has been bothering her. Lick. Swell. Cone-head. Repeat. So what started out as a not-so- unusual trip to the vet for her hot spot, ended up being a cancer diagnosis and recommendation of a full leg amputation. Damn!

But I’m good now. I had my day of tears and fretting and have moved on, knowing with all my heart that she’s going to be just fine. Most importantly, I’m looking forward to having my sweet pup pain-free and happy again.

Mika and the Wee Beals is brought to you by Tripawds.
HOME » NEWS » BLOGS » FORUMS » CHAT » YOUR PRIVACY » RANDOM BLOG


Tripawds Supporter sites have no ads!